Colleen Mullins, a self-proclaimed archaeologist of her own history, excavates documents and photographs from her childhood in an attempt to understand her notions of family and home. For cultivar, she began a photographic investigation of the places between her hometown of San Francisco and rural northern California areas where her family vacationed in the 1970s. Combining her father’s vintage snapshots and found ephemera with her own photographs she weaves a complex history of the evolution of a place over time and through memory. The series examines not just the slippery memories from her childhood, but also the type of American vacation particular to the ‘60s and the ways in which her parents’ worldview informs her own personal vision. Cultivar, referring to plants selected and bred for specific characteristics, reveals her interest not only in tracing her bloodline, but also in the ways in which our interaction with nature shape who we become.

As her title suggests, her interest in nature and culture overlap: she traces her own history through the eyes of her father to determine the characteristics they share and the vision he passed along. Recently, she began to sift through her father’s snapshots taken in his home in San Francisco, and around the city. By retracing his steps through his photographs and rediscovering her own childhood memories, Mullins has developed a clearer picture of the man who was 54 when she was born and how he shaped her vision of the world. Her methods of exploring domestic spaces and ambulatory patterns echo the patterns we see in his spare black-and-white frames.

Simultaneously, she charts the changes in her childhood landscape of California to unearth her memories associated with place. Mullins has long been interested in natural forests, and the landscape caught between urban and rural spaces. Sonoma County, the focus of this work, is an area rich in natural and cultural history where conserved state and regional parks, wine producers, camping resorts, and local enterprises all converge. In this series she investigates how the wilderness has been tamed for leisure purposes, especially how land-use shapes the area. She examines the highways that lead from San Francisco to the northern forests, bisecting the hills on either side, and the places along this route that remind her of her youth. In Mullins’ pictures, campsites and beaches, seeming crowded in the vast surroundings, dot the shores of meandering rivers. The golden California light bathes her scenes in a nostalgic glow – as if Mullins were reaching into the past to make her pictures.

Photographs of the storefronts of local businesses condense layers of history as modern-day cars and real estate signs co-mingle with historical pictures of the area in the windows of the shops. Likewise, her installation presents her own photographs alongside those of her father, compressing history to reveal the way her memories and history inhabit geographical space. 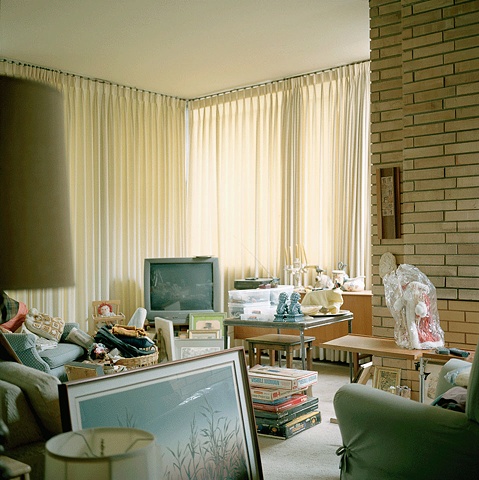 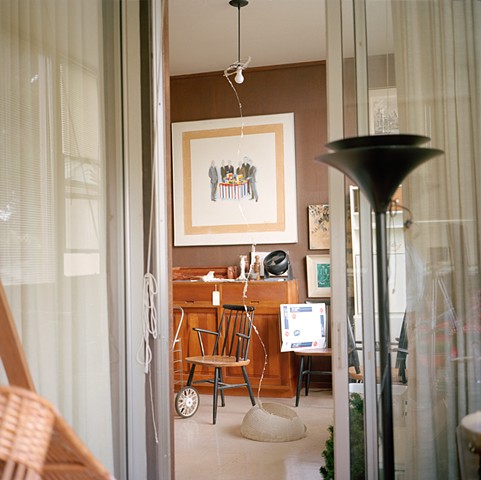 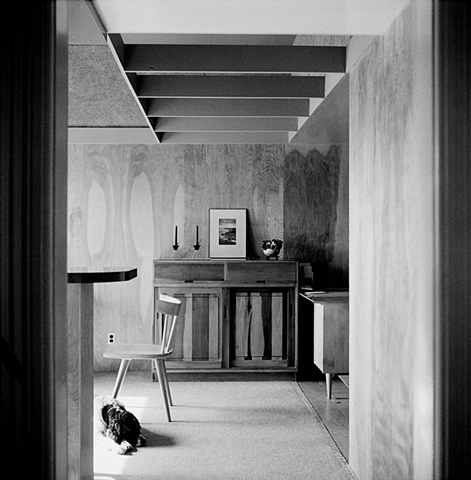 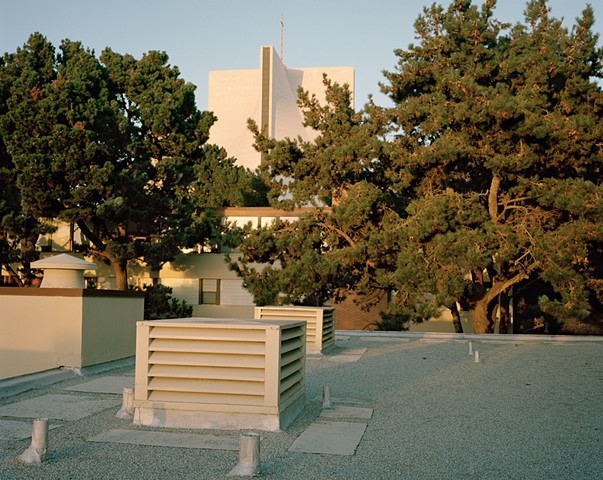 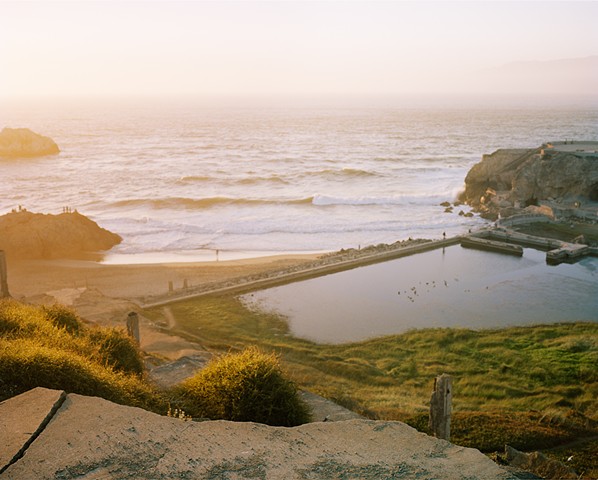 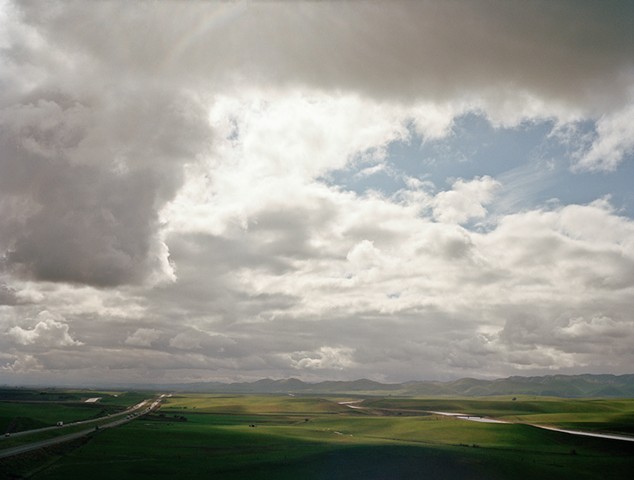 Where the Ranch Once Was
ink jet print 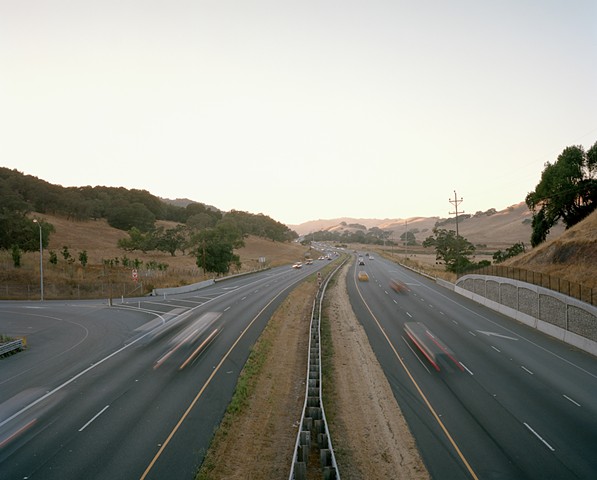 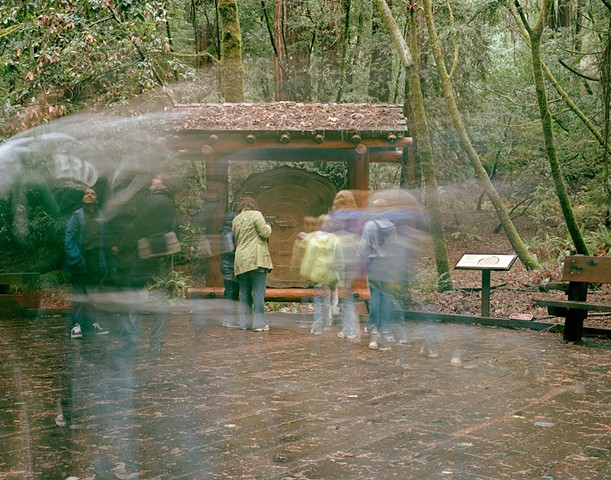 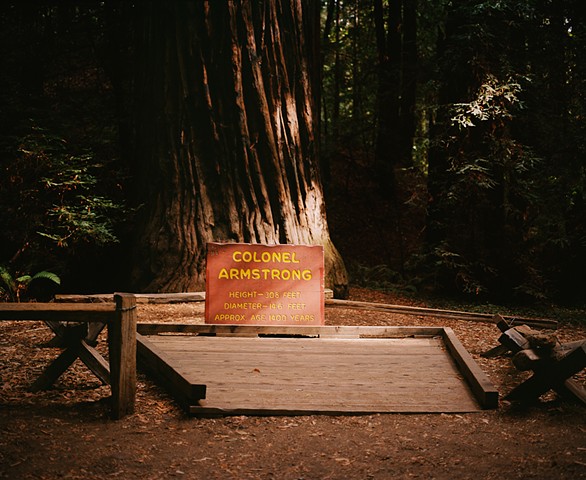 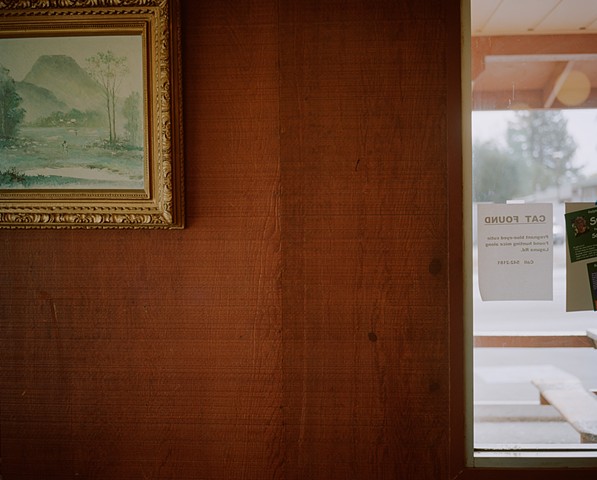 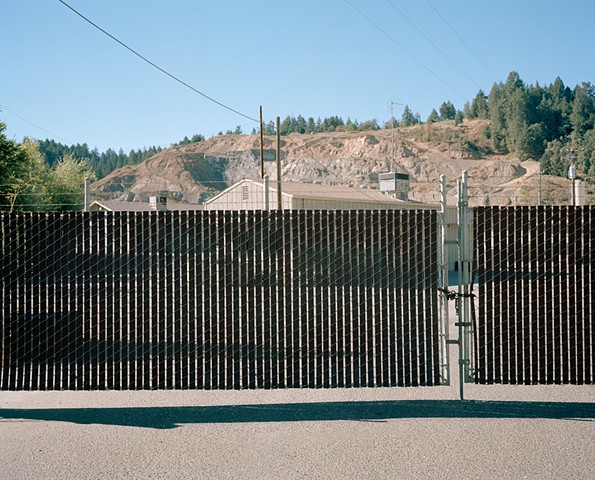 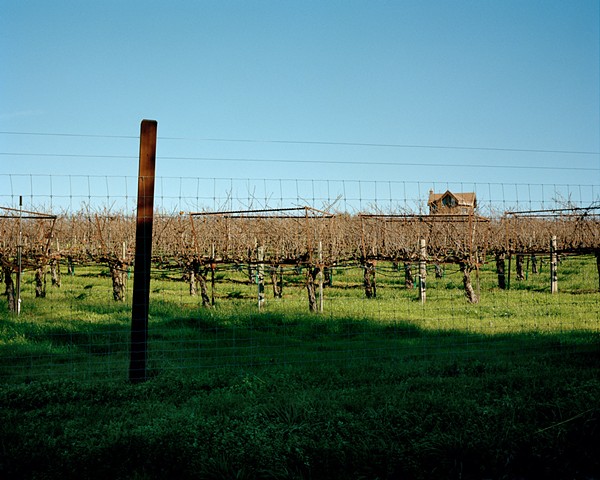 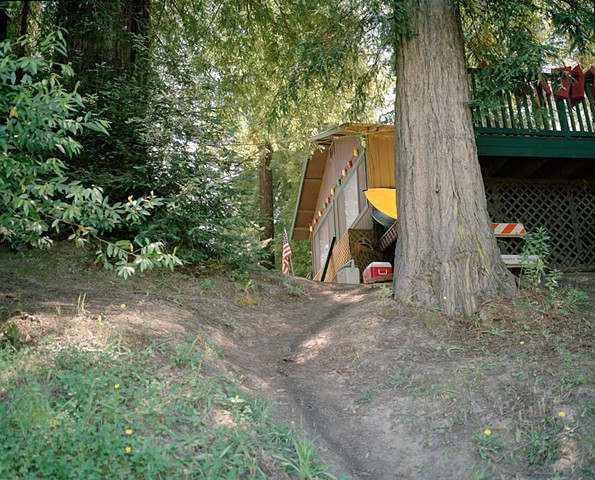 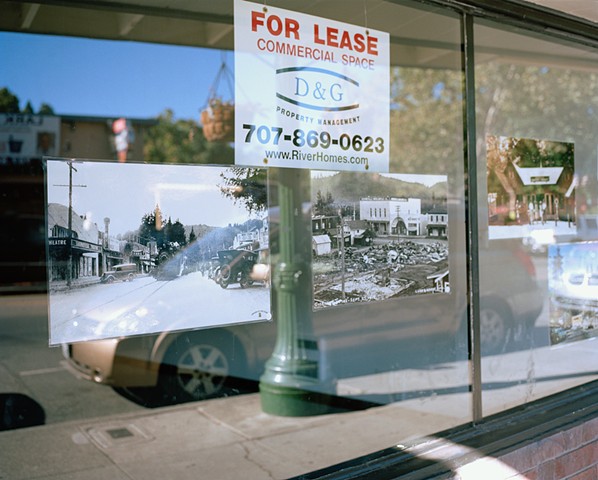 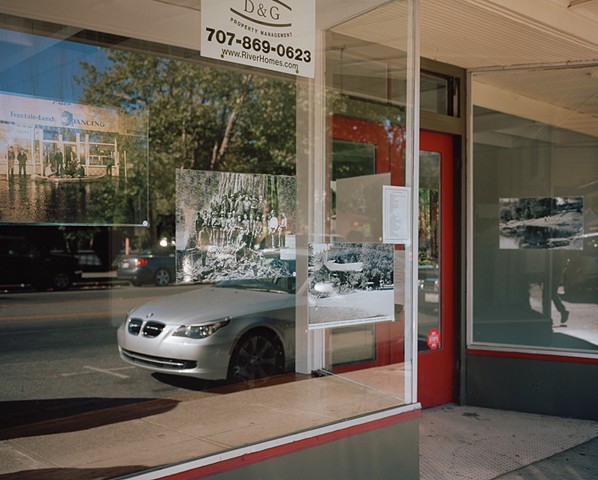 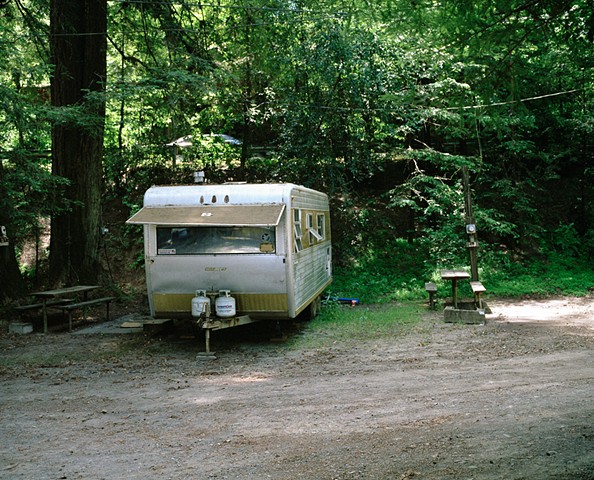 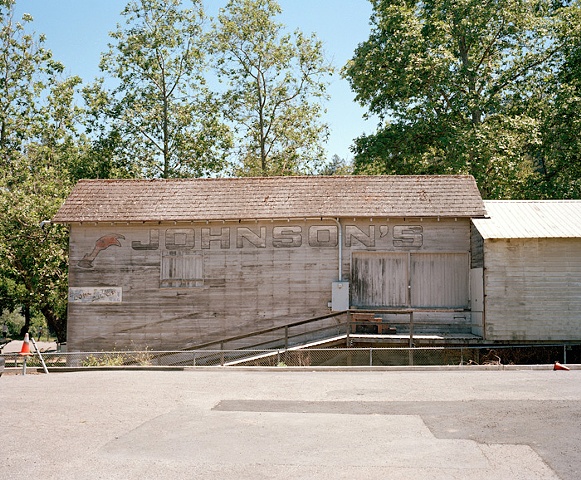 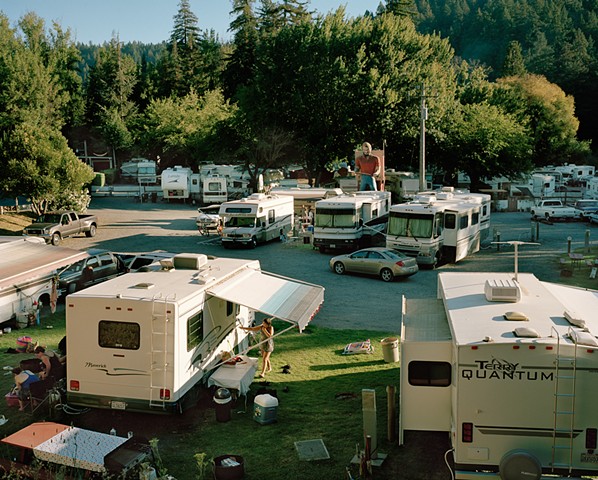 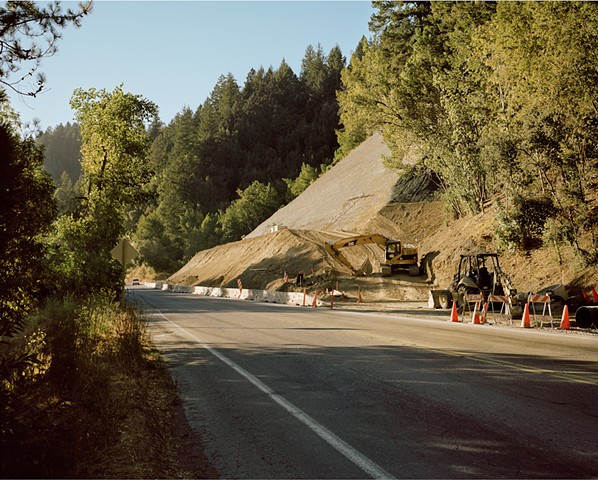 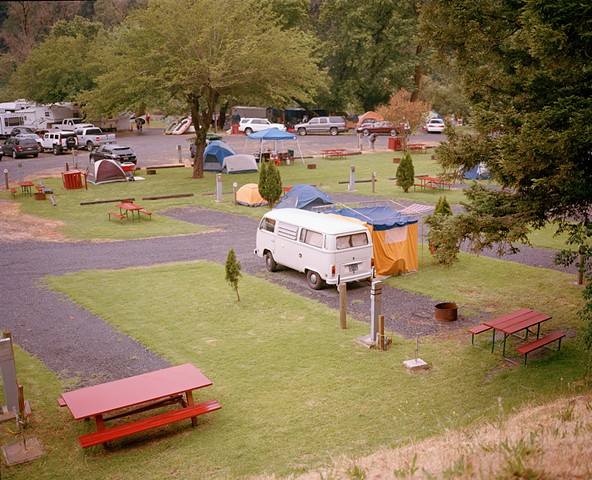 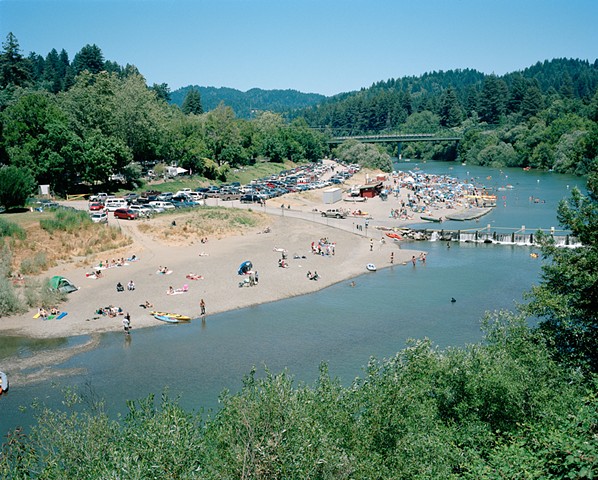 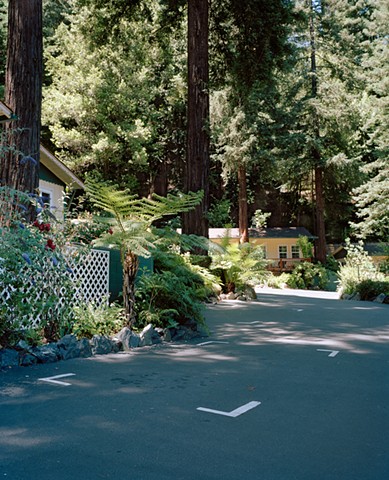 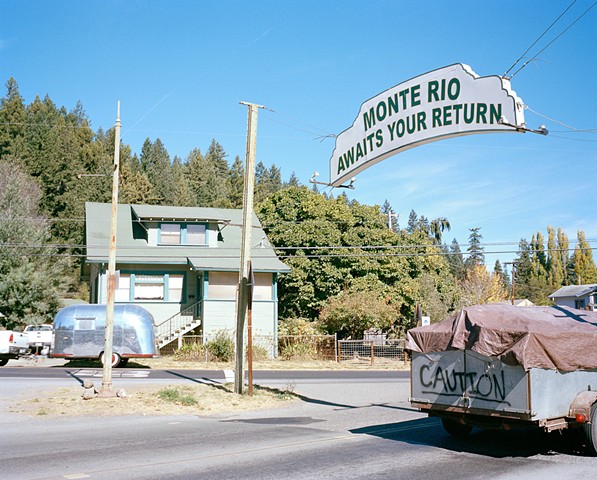 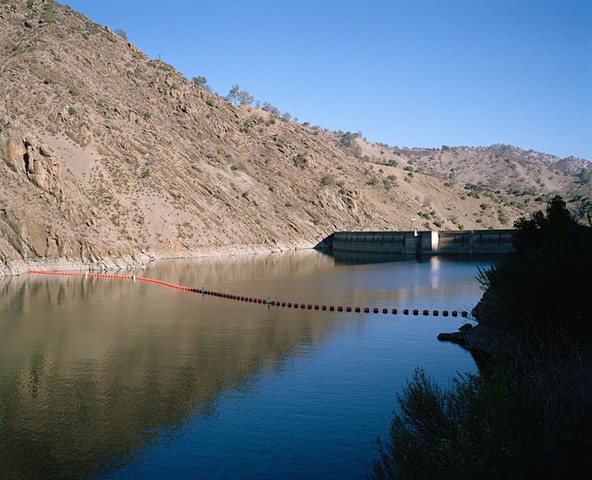 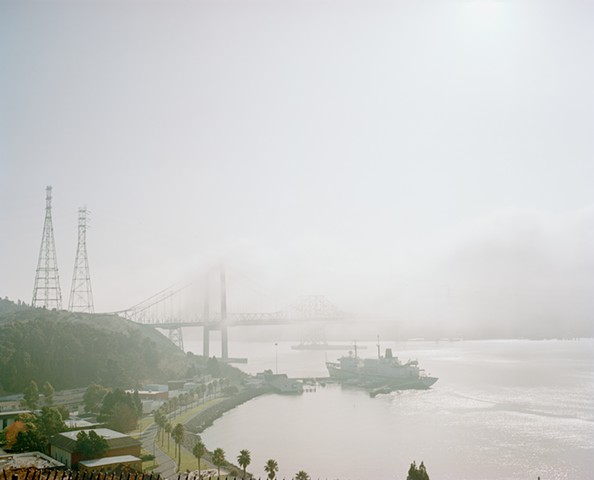 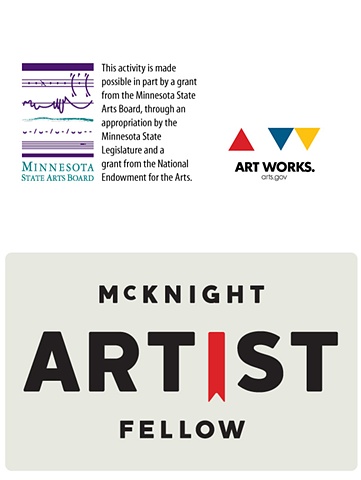